Don’t Be Fooled By This Pop-Up Scam 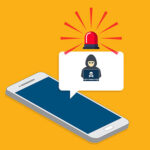 If while using your iPhone, you are confronted with a pop-up that reads “Your Apple iPhone is severely damaged” you don’t have to panic. What you are looking at is a very common phishing scam that is trying to get you to download apps and allow access to personal information.

This particular pop-up is an ingenious strategy that gets people to react rather than think their way through a problem. Who wants to deal with anything like that on their phone? I mean, what a nightmare. The good news is that by closing the pop-up immediately, you can avoid the problems that come with the scam. It’s only effective if the user clicks through the link and then proceeds to download the malicious applications on the other end of it, and enter personal information into forms that follow the link.

Let’s take a look at the scam and what problems it can have for users. One thing you should understand: Lots of people use iPhones.

Apple’s mobile OS, iOS has a longstanding reputation for being the most “secure” of any of the major mobile operating systems. It’s one of the biggest selling points that Apple makes in its marketing, and even though its effectiveness has waned a bit recently due to more people writing malicious code for iOS devices, it still holds true that most users think their iPhone is the top-of-the-line for security.

The “Your iPhone is severely damaged” scam kind of reinforces this notion, as it isn’t a direct attack on the iOS platform, it’s an attack on its users. It is clearly designed as an attempt to induce fear in users and create urgency. This combination will get people to act quickly and allow these scammers to gain the access they seek.

Again, if you just close down Safari without interacting with the ad, you have basically kept any hackers from stealing your data. Moreover, you won’t risk downloading unwanted applications that can severely weaken the security of the device and could cause operational problems.

If you are one of the millions of users that use an iPhone, you’ll want to be on the lookout for phishing scams like this one. Today’s mobile device is increasingly targeted by cyberattackers and will continue to be as the majority of today’s computing is done on mobile.

At Compudata, we like to educate our readers about security issues and can help your business improve its security posture. Give us a call at 1-855-405-8889 to talk to one of our consultants about your business’ cybersecurity.

Comments Off on Don’t Be Fooled By This Pop-Up Scam
Posted in Best practices, Blog
Tagged Apple, Scam, Security

Would you believe it if we told you that the members of Generation X, Millennials, and Generation Z are more likely to fall for online shopping scams than those aged 60 or over? Well, according to the Federal Trade Commission, the numbers aren’t even close. If you’re under age 60, you’re 86 percent more likely to fall prey to scammers. END_OF_DOCUMENT_TOKEN_TO_BE_REPLACED