“Productivity” is Much Different Than it Used to Be 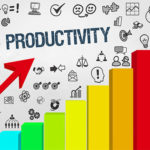 While it may not seem so at first glance, the concept of “productivity” has evolved significantly in the last few centuries—the amount of time it has been seen as a priority. Beginning once technology enabled the focus of life to be less day-to-day survival and more centered around industry and scale, the first whispers of our modern view of productivity started in the late 1700s. Let’s briefly examine how our view of productivity developed, and how many are looking at it today.

How Shifting Technology Changed Our Ideals

Let’s go back to the beginning—before the 1800s, the day-to-day routine was filled with a significant number of tasks dedicated to sustaining until the next. Without the means of preserving much food in the long-term, feeding oneself was largely a field-to-hand-to-mouth prospect.

The First Whispers of Productivity

However, even then, there was evidence of what would eventually develop into our modern world’s obsession. In 1776, when Adam Smith wrote his classic economics treatise Wealth of Nations, he described labor in two terms:

Founding father, inventor, publisher, et. al. Benjamin Franklin also developed what could be seen as a productivity philosophy in 1791, with what many consider to be the first to-do list. His list, unlike those that had come before it, included time intended to evaluate how the day was spent:

Unfortunately, not all these advances were unsullied. One major driver in terms of productivity was the invention of the cotton gin in 1793 by Eli Whitney. While the invention did help boost the United States economy by a considerable measure and increased cotton production by twenty-five times, it regrettably did so by supplementing the deplorable and systematic abuse of slave labor.

Other technological advancements—including things we often take for granted, like light bulbs, telephones, and sewing machines—encouraged labor to shift from the homestead to the factory setting, where the abuse of workers was rampant to help support the growing obsession with maximizing output. For many years, low-wage workers (many of a very young age) toiled in unsafe conditions before labor unions pushed for protective measures.

Meanwhile, the taste for maximized productivity had not gone away. In 1844, one of the two businessmen in Boston with over $100,000 was a manufacturer of day planners, with etiquette manuals of the time recommending such planners as a means of self-improvement.

At the turn of the century, the predecessor of the modern efficiency guru was born. A few thought-leaders like Frederick Winslow “Speedy” Taylor and Frank and Lillian Gilbreth (yes, the ones from Cheaper by the Dozen) spearheaded a movement that grew into the massive industry of management consultants we still see today.

When World War I had rolled around, swiftly followed by the Great Depression and World War II, productivity was suddenly a patriotic duty that was necessary to support the military’s efforts, leading to the introduction of women in what were once male-dominated roles… and when the GIs came home, the sudden expansion of the middle class did little to stifle productivity’s preeminence. After the war effort was over, female workers stayed on to continue working. This meant that convenience was needed in the home.

This convenience was first provided by the food industry, which had picked up on the idea that less time was being devoted to household chores. Therefore, packaged foods and the infamous TV dinner were developed in the 1950s and the microwave invented in the 1960s all to help support quicker meal preparation… followed quickly by an explosive growth in the fast-food industry throughout the 1970s.

The 1970s also saw the initial development of the technology we most closely associate with productivity today—the computer—with the World Wide Web coming in the ‘80s. Microsoft’s productivity solutions were first released at the end of the 1990s. The next few decades, as we have seen, saw exponential improvements in the technology we use to be productive, with mobile devices, cloud computing, and digital assistants now an integral part of daily life for so many.

Where to Go from Here

Perhaps ironically, now that we’re in the best position we’ve ever been to be productive in terms of the tools available to us, our productivity has stagnated somewhat. Many attribute this to the slow adoption of automation, the latest tool we have access to. With relatively slow buy-in of automated workflows, the next milestone is just out of our reach.

Furthermore, there is a growing shift in our definition of productivity, taking a page out of Ben Franklin’s book and focusing on value and benefit over the Industrial Revolution’s output-centric view. While a lot of it seems pulled directly from a book written by the productivity gurus we mentioned above, the modern concept of productivity focuses on other benchmarks, like:

While the amount of work done is still important in a modern business, the value of that work is focused on to a greater extent. Like Franklin focused on, the modern focus is invested more into doing the right things, over a lot of things, with the right reasons as motivation.

The Journey, Not the Destination

Like we said, straight out of a guru’s playbook.

In all seriousness, however, modern productivity standards seek to balance the process with the objective. As opposed to the mentality of the past, the goal is now to optimize the experience that all involved have throughout a given process. This both helps to add meaning to the work that is being done and make this work more sustainable for the person doing it.

Productivity has been closely tied to teamwork for some time now, meaning that a business that wants to accomplish it effectively needs to provide the framework to encourage cooperation and collaboration. The team mentality is something to be embraced, encouraged, and nurtured if a business is to work efficiently.

At Compudata, we understand how important it is for a business to work productively in today’s competitive landscape. That’s why we offer the support and solutions to assist our clients at the quality that we do—the better we serve you and the more productive you can be as a result, the better it is for us.

Comments Off on “Productivity” is Much Different Than it Used to Be
Posted in Best practices, Blog
Tagged Efficiency, Productivity, User Tips

Would you believe it if we told you that the members of Generation X, Millennials, and Generation Z are more likely to fall for online shopping scams than those aged 60 or over? Well, according to the Federal Trade Commission, the numbers aren’t even close. If you’re under age 60, you’re 86 percent more likely to fall prey to scammers. END_OF_DOCUMENT_TOKEN_TO_BE_REPLACED