Getting a Better Understanding of Human Resources 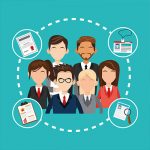 The Human Resources department is now a critical part of any workplace’s success, but there are most likely misconceptions about this department’s mission. Where did the idea of Human Resources come from, and how can technology be leveraged to assist in their duties?

HR’s Origin Story
To better get a grasp of the intentions behind the HR department, it will help to look back to how it was created. Back in the early 1900s, companies had two concerns that needed to be addressed: first, understanding why their employees were dissatisfied enough to leave their positions, and second, resisting the rise of the labor union.

It was ultimately this resistance to unions that gave rise to the idea that HR was to serve as the advocate of the employee. By providing the workforce with someone to express their grievances and complaints to, the union was effectively rendered redundant. As a result, HR was seen as a champion of the employee, their internal representative to upper management. This impression lasted clear from the 1930s to the ‘70s. In the ‘80s, things began to shift again.

HR Today
In the 1980s, a few things changed: new worker protection laws were being passed, and union membership dipped. This caused a major shift in the mission of HR departments. Instead of serving as a worker’s representative, Human Resources quickly became more committed to protecting the company from government retribution due to company problems.

However, by acting in the company’s best interest, many employee issues were also attended to. Even though organizations were acting out of self-interest, employees were better protected against workplace issues like discrimination and sexual harassment - and if these issues did arise, the company was fully prepared to settle out-of-court in exchange for the signing of a non-disclosure agreement in order to protect their reputation.

Unfortunately, issues like this don’t always pan out so smoothly.

What Happens When Human Resources Aren’t a Good Resource
Since the mission of HR shifted in the 1980s, there have been a few negative impacts that should not be ignored. If one still is of the opinion that HR is there to be an employee’s advocate, some workplace bullying and harassment cases would be very surprising.

For instance, if the bullying and/or harassment is coming from a superior, many employees may hesitate to report it for fear of retaliation. This retaliation can come from a manager, or even from Human Resources itself. The application Blind, which allows professionals to share their work experience at companies with prospective employees, reports that nearly half of its users felt some kind of blowback after they reported a workplace incident.

An example of such can be found in the story of Susan Fowler, a former Uber engineer. During her time at the ridesharing company (which Blind reported as having a retaliation rate of 34.72%), one of her managers sent her inappropriate and unwanted messages. Fowler went through all of the proper steps, documenting her experience and filing a report with HR. Despite this, she was given two options: find a different team to work with, or put up with it and potentially receive a poor review from the manager harassing her. Fowler left Uber not long after that, and authored a blog that resulted in an internal investigation at Uber that left 20 employees fired in the aftermath.

Susan Fowler’s case only shows that not all HR departments have an employee’s best interests at heart, siding with the business as a whole to try and cover up issues. However, there is still one important question to address: why can’t Human Resources wear both hats, advocating for the employer and the employee?

Striking a Compromise
Based on what has been reviewed thus far, HR seems to have two main functions. The first is to ensure that the company attracts the necessary talent to succeed in its endeavors, the second being to ensure that the work environment sees to the needs of the employees so that the employee doesn’t leave due to a company issue. Achieving this balance can be very difficult for many HR departments. They often just don’t have the necessary resources to see to both the wellbeing of the employees and the requirements that a business demands.

We respect the importance of a well-equipped and efficient HR department here at Compudata, which is why we make it a priority to offer services and solutions that can make their jobs easier. With improved technology, much of it offering automation, the full schedule of HR can be eased enough so that all duties can be attended to appropriately.

If your Human Resources department could use some help to serve as a representative of both sides of your business, employee and administration, let us know! The solutions you need could only be a call to 1-855-405-8889 away.

Comments Off on Getting a Better Understanding of Human Resources
Posted in Business
Tagged Miscellaneous, Users, Workplace Tips

Smart devices of all types are constantly being introduced to consumer markets. People are finding that some of these devices are making it much easier to track and manage their lives. When considering whether or not these smart gadgets are useful for your growing business, you have to consider two factors: Security and reliability.  END_OF_DOCUMENT_TOKEN_TO_BE_REPLACED