Careful, This Wallpaper will Brick Your Phone. Wait, What? 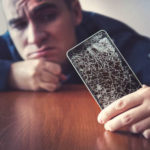 Hold onto your hats folks, this article is a rollercoaster. It has been recently discovered that a totally innocuous photograph is causing smartphones to break when set as the wallpaper. Is this some new malicious type of malware? Are dastardly hackers behind this exploit?

It’s a much crazier story. Let’s take a look

It was discovered that users who set a particular image as their phone wallpaper on Android devices suddenly found their phone crashing. Once the wallpaper is set, the phone will refuse to boot back up, even in safe mode. This means the only way around it is a hard factory reset, which will lose everything on the phone that isn’t backed up elsewhere.

Users are able to safely view the image, and even download the image on their device. The issue occurs once the image is set as a background wallpaper on Android devices, especially newer phones, and it seems to affect Samsung phones especially.

Let’s Take a Look at the Infamous “Cursed” Android Wallpaper

In a Twitter post by user @Universeice, we get a glimpse of the image and the warning not to set it as a wallpaper. Definitely heed our warning and do not attempt to make the image your wallpaper, but it is safe to view:

WARNING！！！
Never set this picture as wallpaper, especially for Samsung mobile phone users!
It will cause your phone to crash!
Don't try it!
If someone sends you this picture, please ignore it. pic.twitter.com/rVbozJdhkL

Why Does This Image in Particular Break Android Phones?

After doing a little research, this photo was taken last year by photographer Guarav Argawal, and ended up on a lot of popular smartphone wallpaper sites recently. Argawal owns the copyright to the image, which means it probably should not have been made available on these wallpaper sites.

The issue has to do with hidden data stored within the file itself. There isn’t anything malevolent going on here - any image can have hidden metadata stored within it. Most digital cameras, for example, record the type of camera and settings used, the time and date, and other information automatically when taking a photo. There is a specific type of data called the ICC profile, which has details about the color profiles of an image.

All of our modern-day devices have limited colors that they can actually display. Our eyes are pretty limited to what colors we can see, so it doesn’t usually affect us. Color profiles set standardized ranges of colors used in an image that devices can use so colors are relatively uniform across our devices. Ask a graphic designer or photographer and they will have a lot to say about their frustrations with color profiles.

That said, the ICC profile used on this image was a fairly uncommon one, and likely not something that Android was configured to use for a Wallpaper. In fact, simply saving the image using a standard color profile makes it safe to use, although it does make the image a little more visually dull.

The craziest part about this image, is that if it weren’t for a single pixel, it would likely work just fine. Combined with the uncommon ICC profile, there is a single pixel (a tiny, nearly invisible dot of color) that causes the actual conflict that crashes Android phones. You can’t see it by looking at it, but somewhere in the pinkish lining on one of the clouds is a single pixel that most modern smartphones just can’t handle existing on the wallpaper!

Okay, I Won’t Set This Image as a Wallpaper. Am I Out of the Woods?

Well, here’s the bigger issue. Now that it’s been revealed how this image can crash Android devices, it can be reverse engineered. It’s pretty easy to switch an image’s color profile and ensure that the perfect storm of innocent-enough accidents happen. All that a hacker or otherwise troublemaker needs to do is set a photo to this uncommon ICC profile, and ensure that there is at least a single pinkish pixel with the exact color value that causes everything to go haywire.

The only way to avoid it is to be extremely careful where you download images from to use as your wallpaper. We suggest only using official wallpaper stores that come with your phone, or your own images. When in doubt, you can just stick with the stock background that comes preinstalled.

We hope that this hasn’t affected you or anyone you know. For more great tips, keep coming back to our blog! Stay safe!

Comments Off on Careful, This Wallpaper will Brick Your Phone. Wait, What?
Posted in Blog, Technology
Tagged Android, Mobile Device, Smartphone

Smart devices of all types are constantly being introduced to consumer markets. People are finding that some of these devices are making it much easier to track and manage their lives. When considering whether or not these smart gadgets are useful for your growing business, you have to consider two factors: Security and reliability.  END_OF_DOCUMENT_TOKEN_TO_BE_REPLACED