How Augmented Reality Could Shift the Workplace Forward 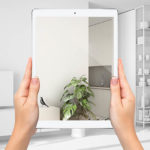 Augmented reality is a technology that has been around for a while, and has been thought of as one of the “next big things” for the past few years. AR almost broke out of obscurity with the development of Google Glass earlier in the decade, but with well-founded security and privacy concerns that come with providing the technology that makes AR possible, the market dropped out. That’s not to say that AR is done, however. In fact, it seems as with the growth of new technologies, AR is also beginning to grow.

Augmented reality is the real-time process of enhancing reality with information using cameras and displays. Some places where AR is well-travelled include sports broadcasts, Snapchat filters, and the world famous Pokemon Go. Some businesses have even begun creating their own AR app that’s designed to increase the immersion of the consumer with their products.

A big hurdle to AR innovation has always been the reliance on devices that have small displays. The lack of technology to use AR-fueled apps leads to a lack of immersion; and, since AR is all about building immersion, it becomes a non-starter when it can’t be delivered. That’s not to say that AR isn’t useful and on the rise. Let’s take a look at some of the variables on the horizon that are sure to push AR forward fast:

AR depends on delivering information to users right now. With 4G LTE, developers had enough bandwidth to make it work, but with the advent of 5G, AR will now have more bandwidth to deliver information.

Hardware has improved greatly and continues to do so, making it more and more capable of handling AR’s assorted demands. Higher processing power and the improvement of sensor technology will go a long way toward fueling AR innovation.

Many organizations are coming up with various new ways to leverage AR to their advantage. Marketing agencies have used AR as a means of boosting engagement with their efforts and initiatives. It has proven useful in training applications in various industries, especially training and development - delivering information to students and workers at the time it is needed.

Of course, as AR becomes more common, it also becomes more affordable for a business to deploy. As more applications and devices become able to support it, its costs should only continue to trend down.

It has become apparent that AR will play a big role in the future of many industries - so, what is your impression of all of this? Is AR just a gimmick, or do you see truly legitimate uses for it in the business environment? Discuss it in the comments, and don’t forget to subscribe!

Comments Off on How Augmented Reality Could Shift the Workplace Forward
Posted in Blog, Technology
Tagged Gadgets, Innovation, Technology

Would you believe it if we told you that the members of Generation X, Millennials, and Generation Z are more likely to fall for online shopping scams than those aged 60 or over? Well, according to the Federal Trade Commission, the numbers aren’t even close. If you’re under age 60, you’re 86 percent more likely to fall prey to scammers. END_OF_DOCUMENT_TOKEN_TO_BE_REPLACED