Let’s Buy a Computer, Part I 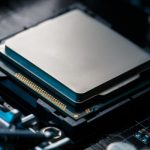 Buying a new computer can be exciting, but when you are buying computers for your business, finding the most cost-effective machine that also fits your operational and budgetary needs can  be difficult. Today, we will start our five-part business computing series by looking at CPU options.

Your new desktop will have a specific purpose. What is it? Ascertaining what you need the new system for will help you make a decision about what hardware that system will need. A computer that is used for typical office tasks will need fewer resources than one being used for audio or video production.

For the PC’s CPU, users have many options to choose from. This ranges from budget processors all the way to processors so fast that they would be complete overkill for any office work. Today, we’ll take a look at the processors you may find from the two most important manufacturers, Intel and AMD.

Intel has tiered their processors to make them easier for the average consumer to understand. Their CPUs are as follows:

AMD has also begun to tier their options, providing consumers a general idea of what processors will fit their computing requirements. Options include:

How Much Does the GHz Matter?

Since the manufacturers have made it easy for people to know what speed processors they are getting, you won’t have to pay much attention to the clock speed (GHz) on your new CPU. Traditionally, consumers would have to pay more mind to it, but all you really need to know now is that when the GHz increases, the computer is faster.

Do the Number of Cores Matter?

When you hear about the “cores” built into a CPU, it represents just how much separate processing a CPU can do. Unless you are on a strict budget, you will want to shoot for at least “quad-core” capability. There are processors that have dozens of cores, but those are typically utilized in server units.

We hope you found some use from this guide. Check back soon for part two of the computer buying guide where we look at your new device’s memory. For more information about purchasing hardware and software for your business, reach out to the certified technicians at Compudata today at 1-855-405-8889.

Running a business can be stressful and scary, and for these reasons, it is perhaps one of the most amazing things that individuals can strive to do. Sure, there are countless ways that things could go wrong, but all it takes is for a couple of things to go right for you to see some level of success and reap... END_OF_DOCUMENT_TOKEN_TO_BE_REPLACED