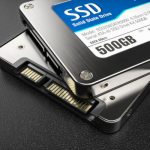 Most modern gadgets have several different options for storage space, including both internal and external storage. However, the amount of space you’ll need on any given device will depend on various factors. It’s critical that you take these factors into account when purchasing or building a new desktop or laptop.

Data storage has come a long way over the past few decades. Floppy disks were the norm… once. They could only store about 1.44 MB of data, enough to hold large text files, but impossible for just about anything else. CDs were the next big hit at about 650 MB of data, while a DVD can hold around 4.7 GB. A single DVD can hold as much data as 3,342 floppy disks. Blu-Ray can store 10 times as much data as a DVD. Google’s data storage exceeds 15 exabytes, or 26.2 million Blu-Ray disks.

How Your Usage Changes Your Storage Needs

You first need to think about how your storage will be used. For example, many organizations have networks that they plug their devices into, meaning they don’t need as much on-board storage. Some utilize the cloud for storage and application access, further removing them from the confines of requiring on-board storage. If either of these are the case for you, then you only need enough for the operating system and some wiggle room on the hard drive. If the usage is more personal in nature, or if you’re even an amateur gamer or video producer, then you will want much more on-board storage.

There are two major forms of device storage: hard disk drive (HDD) and solid state-drive (SSD). Here is a little bit about each:

Hard drives are components in your computer that store data. These mechanical drives utilize tiny electric motors, a spinning stack of magnetic platters, and a small arm to read and write data. This is all housed within a heavy metal construction. Think record players, but for data storage. HDDs are great for storing large amounts of data, but they aren’t as fast or energy efficient as alternative choices. Still, they are cheaper due to the fact that they are more prone to hardware failure, but they do have their benefits. Many laptop manufacturers avoid putting HDDs in their devices to preserve their battery usage.

What Are Your Storage Needs?

You should start by thinking about whether or not you would benefit from an SSD. If you don’t use your PC for much, then you might be able to get away with less storage--around 128-to-256 GB. If your data is stored on the office network, you can shoot for even lower.

If your computer is for personal use, you should seek somewhere between 512 GB to 1 TB. Depending on where you get the computer, you might find that the storage doesn’t influence the PC as much as other components, like CPU or RAM.

You will probably need some kind of additional hard drive storage down the road, so we recommend utilizing an SSD for your operating system supplemented by an HDD for data storage. A gaming PC in particular will benefit from this setup, as they are storage-intensive by nature, as are any machines used for photo or video editing.

Know that an SSD is, more often than not, the superior choice for your primary drive, but it always helps to have an additional hard drive of some sort for extra data storage. One last word of advice: avoid the cheapest options and be sure to take proper backups. You never know when they might come in handy.

For more information on acquiring the best computer for your needs, be sure to reach out to Compudata at 1-855-405-8889.

Smart devices of all types are constantly being introduced to consumer markets. People are finding that some of these devices are making it much easier to track and manage their lives. When considering whether or not these smart gadgets are useful for your growing business, you have to consider two factors: Security and reliability.  END_OF_DOCUMENT_TOKEN_TO_BE_REPLACED