No More Pencils, No More Books… Examining Technology in Education 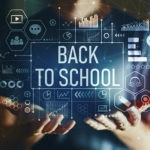 While we typically write about matters that concern your business and its use of technology in this blog, we decided to do something a little different today. Someday in the not-so-distant future, today’s students will make up the workforce, and their educations are more shaped by technology than ever before. That’s why we wanted to examine the role technology plays in education (warts and all), to understand how it is impacting our youth.

How Has Technology Been Beneficially Introduced into Education?

It may be easier to explore how it hasn’t been, to be honest. From official educational tools to the device that students tend to have in their pockets, technology is seemingly everywhere. Chalkboards have been phased out by digital smart displays, and laptops are more and more frequently seen as an essential learning device, as compared to the luxury that they were once considered.

Some educators have leveraged this technology to connect with other classrooms across the world, exposing their students to different cultures. Cooperation and collaboration have become more common, as have breakthroughs being facilitated through the use of technology as an educational tool.

The EdSurge on Air Podcast provided a few accounts from educators that contained anecdotal evidence of technology’s value in the learning process. One educator, Mimi Kasner, shared a story about how she had to work with a young, first grade student who was experiencing significant difficulties in learning how to read and write. It wasn’t until the little girl was introduced to a website that teaches the alphabet that something clicked, and the girl was overjoyed. More recently, Kasner was principal of a school where students were working on self-managed projects when they were interrupted by a fire drill. Teachers approached Kasner, reporting that students wanted the time that the fire drill took from their projects back to work on them.

Sam Jordan, the education technology coordinator for the Alaska Department of Education and Early Development, also expressed how technology has impacted students. Using Skype, students in Alaska and students in Sri Lanka were able to communicate and learn from one another - despite nothing being done about the language barrier between the two groups.

Technology has also made learning more interactive, boosting participation among students by “gamifying” the learning process. What sounds more engaging to you: listening to a teacher reciting facts from a textbook published in the mid-1970s, or turning the lesson into a role-playing scenario or other game, supported by the technology available? With technology, a student will always have access to the most up-to-date knowledge available, inherently improving the quality of their education.

It isn’t just students who can benefit, either. Teachers can leverage technology in their classrooms to make their lives easier as well. For instance, an AI called Jill Watson was developed that could field the questions that students would ask regarding their class processes, answering what “she” could, and passing along those that she couldn’t, to a human teacher. Imagine how much a teacher could accomplish in the future if their students had a resource to turn to with their questions.

From improved learning tools, to more accessible teaching methods, technology shows great promise in advancing the educator’s goals. However, there are some negative considerations to take into account.

How Technology Can Hurt Education

Like we said, we’re getting into the warts as well. Some studies suggest that technology can be just as much of a detriment to education as it can be a supplement.

For instance, there’s the obvious issue - the risk of distraction. A survey that questioned 500 community members of the University of Waterloo found that very nearly half of them found their technology to be distracting, and 68 percent of teachers found the use of cellphones in class bothersome. Another study found a causal link between the use of technology and lower test scores.

Students can also abuse this technology as well. “CheatTech” has been targeted by the United Kingdom, as students have come up with increasingly clever means of cheating academically. In fact, it has been suggested that watches - not smartwatches, but watches - should be banned from examination rooms, simply because it is hard to distinguish between the two. Cheating in the UK increased by 25 percent and 26 percent in 2017 and 2018, respectively, a rise attributed to smartphones.

Students in the United States have been known to use almost imperceptible earbuds to receive information from their phones, stashed away in their backpacks, while students in Thailand and Singapore used spy glasses to transmit exam questions to their friends, who would then send them a message viewable on their smart watches. Chinese students were cheating college entrance exams by wearing false fingerprints.

One almost has to wonder if the ingenuity of these kids is actually more indicative of their intelligence than a written examination could ever be.

Regardless, there is no question that technology is here to stay, including in our educational institutions. We will just have to wait and see where things land.

What do you think? Is leveraging technology the natural next step in education, or would students be just as well served by a No.2 pencil and some loose-leaf paper? Does introducing technology in school prepare kids to embrace technology when they enter the workforce? Share what you think in the comments and discuss!

Would you believe it if we told you that the members of Generation X, Millennials, and Generation Z are more likely to fall for online shopping scams than those aged 60 or over? Well, according to the Federal Trade Commission, the numbers aren’t even close. If you’re under age 60, you’re 86 percent more likely to fall prey to scammers. END_OF_DOCUMENT_TOKEN_TO_BE_REPLACED