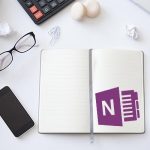 Microsoft is saying goodbye to OneNote 2016. Although the handy note-taking app will still be supported until October 2020, with extended support for a few more years after, Microsoft has decided to no longer add features to it, and instead, they are focusing on the new version of OneNote that comes bundled with Windows 10.

Let’s talk about how to make the switch between the two.

Check to Make Sure You Have OneNote Installed

If you are a frequent user of Microsoft OneNote, you’ll want to know what version you are actually using. If you have Office 2016 or Office 365, chances are you are using OneNote 2016.

If you are pretty new to OneNote, you might just have the newer version that came bundled with Windows 10. If that’s the case, you don’t have anything more to do!

If you aren’t sure, there are a few ways to check.

The older version of OneNote is typically labeled as OneNote 2016 while the new version is just called OneNote. You’ll also notice a difference between the icons, as shown above.

To check to see if you have the new OneNote installed, click on the Start Menu and type ‘onenote’ and you should see the app just labeled as ‘OneNote.’ If you have 2016, that should show up there too. 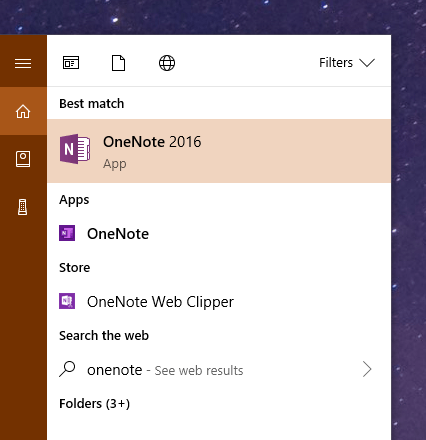 If you don’t see the new version of OneNote, you are either very behind on your updates, or it wasn’t dished out to your workstation. Either way, it’s best to check with IT if that’s the case or give Compudata a call at 1-855-405-8889.

You can open and use the new OneNote app at any time, but your notes from OneNote 2016 might not appear. Keep in mind you’ll also need to sign into the new OneNote for the first time with your Microsoft or Office 365 account, which might require your IT admin.

Migrating Notes from OneNote 2016 to OneNote

OneNote 2016 has a couple different ways it can store a notebook. Chances are even if you use OneNote a lot, you probably don’t realize how it’s working behind the scenes, because it rarely asks you if and where you want to save something. That’s part of the beauty with every version of OneNote - once it’s set up, it just saves everything you do on the fly.

First, Let’s Back Up Your OneNote 2016 Notebooks

Back Up your OneNote 2016 Notebook

Open OneNote 2016 and perform the following to back your notes up.

OneNote 2016 stores all of your notes in notebooks. These notebooks, by default, are either stored in your Documents folder in their own folder, or on Microsoft OneDrive. You can also store notebooks on a shared location on your network or essentially anywhere else.

If you are using one of the default options, the new version of OneNote will likely have no problem pulling up your old notebooks.

Open OneNote (the new version) and Try Opening Your Notebooks

If your notebooks aren’t being found, it is likely that they aren’t stored in a folder that the new OneNote recognizes. For example, if you’ve stored a notebook on your network instead of in the Documents folder that OneNote expects, the new OneNote won’t find it.

If that’s the case, you’ll need to find where you are storing your OneNote notebooks and drag them into your Documents folder.

WARNING: Before you do this, consult with IT, as there may be a reason your Notebook is stored centrally on the network instead of on your workstation. If that’s the case, a technician will want to export your OneNote notebooks and deploy them in the proper location or help push them to the cloud so they can continue to be accessed without needing to be stored directly on your workstation.

A reliable and skilled IT department is integral for the success of your business. If your IT team is burnt out, overworked, or dissatisfied, operations will suffer and your network will experience one IT emergency after another. Just as you expect your IT staff to use best practices, as a business owner, you need to manage your IT staff as... END_OF_DOCUMENT_TOKEN_TO_BE_REPLACED