Pushing the Limits of the Smartphone Battery 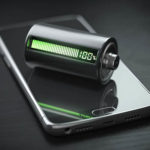 The smartphone is a transcendent innovation of a brilliant idea. As these devices have gotten more and more powerful, it has seen a situation where the batteries powering these devices keep having to outperform the batteries from the previous year’s devices. The technology, however, hasn’t changed very much in over a decade. Today, we take a look at modern smartphone batteries and innovations to power sources that you can expect to see going forward.

Cellular phones have been on the market for much of the past 35 years or so. In the 1980s and early 1990s, cell phones were large devices that were powered largely by nickel-cadmium (NiCD) batteries. These batteries, like the devices they powered were bulky and heavy, and didn’t really last very long. They also degraded quickly, especially if they were charged while there still was a charge in the battery.

Soon, as the demand for cell phones started to increase, the nickel-metal hydride (NiMH) batteries began to be manufactured. This material was lighter and took less time to recharge; and, while they still suffered from what would be considered severe degradation today, it wasn’t as bad as the NiCD degradation. As this technology was developed in the late 1990s, the market for cell phones began to expand rapidly.

For years, devices were made with NiMH batteries that could be swapped as they degrade, but as the smartphone was developed the devices began to need a stronger power source to run devices that were effectively computers in your pocket. The Lithium-ion battery was developed. Unlike nickel-based batteries, lithium-ion batteries didn’t degrade, they lasted longer and were much easier and faster to charge. The one drawback was their price, which can be seen in the price jump in devices used nowadays.

Recently, innovations have helped develop what is known as the lithium-poly ion (Li-Poly) battery. This type of battery has 40 percent more power than the NiMH batteries, but costs are still too high for manufacturers to commit to a Li-Poly battery to anything but flagship devices.

With so much changing about the way people use technology, there needs to be a concerted effort to enhance battery technology. Today, they have begun to replace the graphite found in today’s lithium-ion batteries with silicon. This improves the performance of these batteries by up to three times, but that is hardly the most interesting advancement. Some new technologies you are likely to see at some point in the next several years include:

As the world goes more mobile, it will be the batteries that allow for that mobility. If you would like to leverage mobility to kickstart your business’ productivity, our experts can help you by helping you procure the resources necessary to make secure mobility possible. Call us at 1-855-405-8889 to learn more.

Comments Off on Pushing the Limits of the Smartphone Battery
Posted in Blog, Technology
Tagged batteries, Smartphone, Technology

Would you believe it if we told you that the members of Generation X, Millennials, and Generation Z are more likely to fall for online shopping scams than those aged 60 or over? Well, according to the Federal Trade Commission, the numbers aren’t even close. If you’re under age 60, you’re 86 percent more likely to fall prey to scammers. END_OF_DOCUMENT_TOKEN_TO_BE_REPLACED