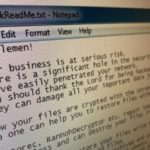 Hackers have crippled the computer systems of three Ontario hospitals in recent weeks, prompting concern about the type of malicious software used and whether more facilities may be at risk.

The malware, known as "Ryuk," attacks computer networks but remains invisible to average users for weeks or months. During that time, it collects information about the organization and its perceived ability to pay a ransom.

Ryuk then locks files, demanding the network owner pay a sum of money to make them accessible again.

The criminals behind the attack "will learn how you operate from A to Z… then they'll hit you," Zohar Pinhasi, a Florida-based cyber counterterrorism expert told CBC News. He said it's likely other Canadian hospitals are affected and haven't yet detected it.

Delays for patients, headaches for staff

The impact of the malware attack has been wide-ranging for the three affected hospitals, located in Toronto and southwestern Ontario. Email systems were taken offline, health-care records became harder to access and patients were warned of longer wait times.

Employees had to transcribe patient information onto paper by hand. Hospital officials stressed, though, no data had been accessible to the hackers.

The malware "came into our system, but no data left our hospital," said Sarah Downey, CEO of Toronto's Michael Garron Hospital. "It was picked up by a firewall before [the data] could leave."

Michael Garron Hospital, formerly known as the Toronto East General, posted a message on its website on Sep. 26, alerting the public that it had "discovered a virus on one of the IT systems."

The same day, the Listowel Wingham Hospitals Alliance said on Facebook its two hospitals in rural southwestern Ontario were suffering an "information technology system disruption, which means our clinical applications are affected."

All three hospitals said they paid no money to retrieve their files and no specific amount was demanded. Systems at all three facilities are in the process of being restored, the hospitals said.

The RCMP urges malware victims not to pay any ransom because there's no guarantee the files will be unlocked. Cyber criminals may even demand more money or identify the victim as a target for further attacks.

In an advisory last June, the U.K.'s National Cyber Security Centre warned the malicious code associated with Ryuk will block anti-malware software, allow hackers to monitor a victim's computer activity and spread to other machines on the same network.

Access to the computers can even be sold to "other criminal operators," the British report said.

It's unclear how the Ontario hospitals became targets, but the malware often penetrates systems using a Trojan horse: a user opens an infected email attachment and the malicious code spreads. (Police advise users not to click on emails from people they don't know.)

The Ontario health-care facilities aren't the only ones that have fallen victim to Ryuk attacks in recent days.

The episode, however, barely compares to the massive proportions of the global WannaCry ransomware pandemic in 2017, then described by European police as reaching an "unprecedented level" of infection.

At the time, many of the victims were found to have been running out-of-date Windows software that wasn't protected from such infections.

Would you believe it if we told you that the members of Generation X, Millennials, and Generation Z are more likely to fall for online shopping scams than those aged 60 or over? Well, according to the Federal Trade Commission, the numbers aren’t even close. If you’re under age 60, you’re 86 percent more likely to fall prey to scammers. END_OF_DOCUMENT_TOKEN_TO_BE_REPLACED