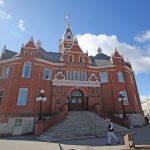 The City of Stratford Ontario says it has been the target of an apparent cyber-attack, but officials do not believe personal information was compromised.

The City of Stratford says it has been the target of an apparent cyber-attack, but officials do not believe personal information was compromised.

The city northeast of London first acknowledged the incident in a Sunday night Facebook post. Stratford Mayor Dan Mathieson said Monday they’ve determined it was a ransomware attack, but IT staff has “found no evidence of data theft or transfer.” He added the city is currently working with security experts and law enforcement agencies on how best to proceed.

“We are taking an abundance of caution in doing so to ensure the safety of the city’s information systems and data,” he said.

“Looking into how it originated, who could be responsible for it,” he said.

Fischer added police computers were not affected “in any way whatsoever.”

Mathieson said they won’t speculate what the target of the ransomware attack was or where it originated from.

Mathieson said he wasn’t aware of a recent cyber attack on the city, but acknowledged it’s becoming a widespread issue across the country.

Smart devices of all types are constantly being introduced to consumer markets. People are finding that some of these devices are making it much easier to track and manage their lives. When considering whether or not these smart gadgets are useful for your growing business, you have to consider two factors: Security and reliability.  END_OF_DOCUMENT_TOKEN_TO_BE_REPLACED