Clarifying a Few IT Stereotypes 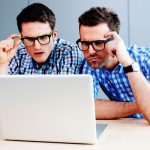 We’ve long accepted that, as an IT provider, there are a lot of stereotypes about what we can do and how we do it. Yet, just because we’ve accepted it, doesn’t mean we aren’t going to do anything about it. That’s why we wanted to use this blog post to clear up a few misconceptions about the nature of IT services.

Misconception 1: Our vocabulary is limited to “Did you turn it off and on again?”
Yes, yes, haha. This one has become the go-to punchline for almost any joke having to do with IT. However, consider what humorist Leo Rosten said:

“Humor is the affectionate communication of insight.”

In other words, jokes tend to poke fun at a larger truth - in this case, IT resources have gained the reputation of asking this question so often because they do ask it quite often. This is because it actually is an effective way to resolve many issues. Reboots have proven their value countless times over, so when we ask you if you’ve already tried doing that, we’re actually taking a lot of explanations for your issue out of consideration. This allows us to more efficiently troubleshoot the actual problem - and if you hadn’t yet tried a simple restart, it might do the trick.

Misconception 2: IT is actually, like, super easy to manage.
With computers being remarkably more user-friendly than they once were, it also isn’t all that uncommon for many users to assume that everything that IT does, they could probably do for themselves.

Technically, in a lot of cases, yes… but it would probably be a mistake.

In IT, while a process might be simple in and of itself, there’s a good chance that there are a lot of other considerations to take into account. For instance, let’s look at the process of setting up a new workstation. It’s a pretty plug-in-and-play process. Right - except that there’s data transfer, continuity, and security also to consider. On top of that, there’s also the process of getting the new PC ready for use. If done incorrectly, there are a vast amount of ways that your business can be left vulnerable. This is why it is so crucial to entrust these processes to someone who is very familiar with them.

Misconception 3: An IT resource is really just a professional Googler.
It isn’t uncommon to see an IT professional consulting Google, and sure, it might be unsettling for an end user to see it happening. However, it might help to put things into perspective.

IT is one of the fastest-evolving fields in the world, so even the most credentialed and qualified tech might not be completely up-to-date. Therefore, to prevent their actions from causing a bigger problem, a good IT resource will turn to other resources to confirm that they are taking the right course of action. In fact, this makes it actually preferable to bring in a Google-happy tech. It just shows you that the tech is committed to doing their job correctly.

At Compudata, we’re proud that our technicians know their stuff as well as they do - and know their limits enough to seek out the right answers to your issue. So, next time you experience a problem with your technology solutions, turn your system off and on again, and (if that doesn’t work) give us a call at 1-855-405-8889.

Comments Off on Clarifying a Few IT Stereotypes
Posted in Technology
Tagged IT Supports, Outsourced IT, Users

Running a business can be stressful and scary, and for these reasons, it is perhaps one of the most amazing things that individuals can strive to do. Sure, there are countless ways that things could go wrong, but all it takes is for a couple of things to go right for you to see some level of success and reap... END_OF_DOCUMENT_TOKEN_TO_BE_REPLACED