OLED Displays Are Something Special 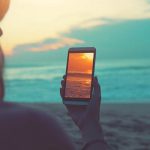 Displays are a huge selling point for many commercially available technologies. With the need for high definition capabilities now commonplace, many manufacturers have been looking to OLED technology. Today, we will take a look at the OLED display to give you an idea what makes it so fundamentally superior to other LED displays.

What is OLED?
OLED, or Organic Light Emitting Diodes, are much like conventional LED technology. A light emitting diode (LED) is a semiconducting light source that functions by producing light by moving electrons into defined spots within a screen’s emissive layer. Electricity goes in and light comes out. OLED uses the same concept, but instead of individual LED bulbs being lit up, OLED uses light emitting films. This allows the OLED display to produce higher contrast images. Lights are lighter and darks are darker; and, because of the makeup of OLED film (hydrocarbon chains rather than semiconductors), these displays use significantly less energy (electricity) to produce images similar to traditional LED technology. Since hydrocarbon is an organic material, the “O” in OLED stands for “organic”.

How Does It Work?
An OLED panel is made up of several layers. The substrate layer acts as a structural framework; the anode, the film that draws electron; the cathode, the film that provides electrons; and the organic layer between them. The organic layer is further divided into two layers: a conducting layer that has the holes and an emissive layer where light is produced.

Types of OLED
The different OLED displays are used for different types of devices. Passive-matrix OLED (PMOLED) have slower refresh rates, meaning that they are used on devices that need only static images. Active-matrix OLED (AMOLED) have faster refresh rates, and are used for televisions and smartphones that have applications that need to refresh quickly.

What Are the Benefits?
Since OLEDS operate as both a light source and color creator, simultaneously, they produce several benefits over standard LED displays. They include:

With OLED displays beginning to show up in many mediums it’s good to know how these displays work. Have you purchased a device with an OLED display? Leave your thoughts in the comments below, and continue coming back to our blog soon for more great and useful technology information.

Comments Off on OLED Displays Are Something Special
Posted in Technology
Tagged Display, LED, Technology

Would you believe it if we told you that the members of Generation X, Millennials, and Generation Z are more likely to fall for online shopping scams than those aged 60 or over? Well, according to the Federal Trade Commission, the numbers aren’t even close. If you’re under age 60, you’re 86 percent more likely to fall prey to scammers. END_OF_DOCUMENT_TOKEN_TO_BE_REPLACED