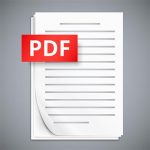 Today, while the world is still effectively split between PCs and Macs, we have at least one file format that bridges the divide: the PDF. This file format became standard in business communications, and is now used the world over. Today, we’ll dive into the history of the Portable Document Format and why it is so well-suited to business processes.

The Creation of PDFs
Think about what a PDF is best known for: the capability to share information as it was created, period. The document looks and acts the same whether still digital or if printed, regardless of a user’s operating system.

Over at Adobe Systems in 1990, cofounder John Warnock drafted a paper titled The Camelot Project, describing how limited prospects were when it came to digitally sharing information. Warnock would go on to assemble Team Camelot, the group that ultimately created the PDF to be what it was imagined to be - a universally-compatible document sharing platform.

However, the Portable Document Format initially wasn’t nearly as popular as it is today.

For one thing, it initially required the purchase of Adobe Acrobat in order to be utilized, and the long download times of the early Internet certainly didn’t help matters. However, Team Camelot continued to add functionality as the Internet grew in popularity, and the format was eventually adopted by the International Organization for Standardization and made an open standard format.

PDFs, And Their Advantages, Today
Now, there are essentially three different kinds of PDFs, each with their own capabilities and limitations. This all depends on the makeup of the PDF and whether or not it has a ‘text’ layer under the ‘image’ layer.

Scanned PDFs - Scanned PDFs are effectively a photograph of a document, saved onto the computer as an image. As such, they are not natively searchable or editable, although certain programs can be added to them to change this.

Digitally Created PDFs - These PDFs are those that are created in the computer, with all components still able to be altered. This includes the images displayed upon the PDF.

Searchable PDFs - Remember how we mentioned that scanned PDFs can be made to be searchable or editable? That’s thanks to Optical Character Recognition (OCR) and the fact that this process adds an editable text layer to the image layer. This enables greater interaction with these PDFs. Many document scanners come with software to convert a scanned document into a searchable PDF, and is the core foundation of a paperless office.

There are also numerous advantages to leveraging a PDF for your business purposes. Not only are they convenient to use and universally compatible, additional security can be set up to protect these documents and their contents.

Did you ever think that simple PDFs had such an involved history? Share your thoughts in the comments!

Would you believe it if we told you that the members of Generation X, Millennials, and Generation Z are more likely to fall for online shopping scams than those aged 60 or over? Well, according to the Federal Trade Commission, the numbers aren’t even close. If you’re under age 60, you’re 86 percent more likely to fall prey to scammers. END_OF_DOCUMENT_TOKEN_TO_BE_REPLACED