The Fears and Benefits of Automation 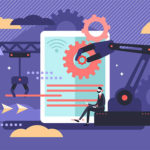 For years, people have been increasingly worried about the potential onslaught of automation on human jobs. As computer systems and artificial intelligence have improved, there are some legitimate concerns for unskilled workers or those that work in industries where automation is featured. Today, we’ll dive into what concerns workers should have on account of automation and why no one should be panicking quite yet.

Automation happens when technology is used to complete tasks instead of having them processed by humans. With human input minimized, the need for (and inefficiency of) human workers is minimized, making workflows more predictable, repeatable, and effective. Computing systems have been automating jobs that used to be completed by human workers for decades, but the onslaught of new technologies (AI and machine learning) has some people more concerned than ever before.

Let’s just put it this way, some people are worried and have no reason to be, some people aren’t worried and should be, and most people aren’t worried at all. As it stands, about a quarter of the current workforce has concerns that automation could take their job in the next five years. Young people, who are more likely to be aware of the technology fueling automated shifts in business are the most worried (at around 37 percent). The older a worker is, the less likely they feel as though they can be replaced with automated systems.

What’s more interesting than the age difference is the income difference. 34 percent of workers that make under $50,000 per year are afraid their job will be automated. From there it decreases exponentially as income increases. That’s not so surprising considering that a lot of jobs being lost to automation will be filled with unskilled workers.

Finally, if you break it down by industry, there are some industries that have already seen automation disrupt human jobs. Industries like automotive, business support and logistics, advertising and marketing, and especially retail have some real concerns about automation.

Truck drivers, for example, are one of the most concerned as the technology to fuel self-driving trucks is already here, and all it would take is some legislation and some refinement for those workers to be out of a job. The main problem with this is that those workers don’t have many skills that will put them in the running for other jobs and it will be difficult for former truck drivers to reenter the workforce with any semblance of monetary stability.

Overall, I would say that most workers know if their jobs are in danger of being cut due to automation, and while they aren’t too happy about it, the big picture suggests that there will be different opportunities created by the very same automation.

This isn’t a trick statement. For every person that is worried about a machine taking their job there are two that use automation to make their jobs easier. Humans have skills, but much of business is handling small repetitive tasks that are designed to keep a business going. If you can use technology to automate those tasks, and refocus skilled workers on what they’ve been trained to do, more will get done, faster. Higher degrees of productivity and efficiency is exactly what every business is looking for out of their workforce. If they have to use automation to get that out of their human resources, then it is a solid strategy.

Companies are automating all types of processes to save money, work smarter (not harder), and get the most out of their employees. The better businesses are, the more demand they will have for their products and services and the more jobs they will create. It’s this notion that unskilled workers have to contend with.

It will be interesting to see how the situation unfolds. What do you think? Do you think the machines are coming for your job, or are you going to be much happier and better off working alongside smart systems like AI? Make sure to return to our blog soon for more technology content.

Comments Off on The Fears and Benefits of Automation
Posted in Blog, Technology
Tagged Automation, Innovation, Technology

Smart devices of all types are constantly being introduced to consumer markets. People are finding that some of these devices are making it much easier to track and manage their lives. When considering whether or not these smart gadgets are useful for your growing business, you have to consider two factors: Security and reliability.  END_OF_DOCUMENT_TOKEN_TO_BE_REPLACED