The Limitless Future of Virtual Reality 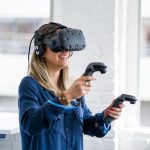 Virtual reality (VR) is a technology that a lot of people don’t know what to make of. Most people's experiences with VR have either been from a third-party perspective or seen through their smartphones with the help of a $20 headset you can get about anywhere. In fact, in a study done by Statistica, it was pretty evident that first-person experience with VR is minimal. Of the 3,000 people polled, only 16 percent of men and six percent of women admitted to trying a “real” VR headset. Today, we will take you through modern VR technology and see what the future potentially holds for virtual reality.

In 2019, after some thirty years of development of the technology, not many organizations have invested in VR. However, VR has finally established itself as an entertainment platform. Some of the most influential organizations in the world made that happen. Samsung and Google both created VR experiences using mobile devices, while Sony developed a VR platform for their PlayStation 4 game console. These have been marginally popular, but when we talk about future VR-for-business function, these options likely won’t be on anyone’s radar.

Two options that are clearly at the top of the commercial virtual reality space are the HTC Vive (and Vive Pro) and the Oculus Rift. Oculus, which is owned by Facebook, currently has the lead in actual VR sales, but as with the HTC Vive (and Vive Pro), the platform needs a high-end computing rig connected to it to run the software. These two will provide users with the most immersive experience that isn’t only designed for gaming (even though a majority of the applications for them are games).

Both VR options present users with the capacity to immerse themselves in their virtual worlds, providing developers with unprecedented opportunities for software creation. The applications that are being built for VR allow users to explore the earth (and space) in a manner that may be completely immersive, but it is only a simulated reality.

The Immediate Future of VR

The future of VR presents less in the way of simulations, and more in the form of reality. People aren’t likely going to be able to walk on the moon or swim to the bottom of the Marianas Trench, but with VR-supported systems running educational and training software, people will finally be able to use virtual reality to experience lifelike experiences that they wouldn’t typically have access to.

Many manufacturers have begun to work on Microsoft’s Mixed Reality (MR) devices with an eye for business integration by 2020. The platform is much like virtual reality, but it uses elements of virtual reality and elements of its sister technology, augmented reality, to produce a construct explicitly built for business professionals who work in technical jobs. Jobs that current IT haven’t been able to find solutions for.

There is an expectation that VR will move past its entertainment-only profile sometime very shortly. Since developers are hard at work, creating software that takes advantage of the seemingly endless ways in which a virtual sandbox will help business professionals improve their performance and the way that they look at their work.

What are your opinions of VR? Do you think it can ever be a viable business tool, or do you think it’s only ever going to be a gimmick technology used to play games on? Leave your thoughts in the comments section below.

Would you believe it if we told you that the members of Generation X, Millennials, and Generation Z are more likely to fall for online shopping scams than those aged 60 or over? Well, according to the Federal Trade Commission, the numbers aren’t even close. If you’re under age 60, you’re 86 percent more likely to fall prey to scammers. END_OF_DOCUMENT_TOKEN_TO_BE_REPLACED