Understanding the Motives of Hackers 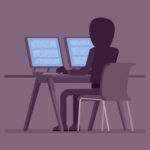 The term “hacker” has firmly become a part of the public lexicon, thanks largely in part to pop culture and its liberal use of the term. However, the use of the term so frequently has effectively diluted its meaning to “someone good with computers.” In order to keep your business secure against the hackers of the real world, it may help to understand the motivations behind their activities.

To accomplish this, let’s examine the various types of hackers out there, and what it is that drives them to do what they do.

Identifying Hackers, Based on Why They Hack

“Hacker” is one of those blanket terms that most people take a lot of liberties with. However, like most blanket terms, one of its potential uses is focused upon much more heavily than the others. When you hear the word, what picture pops into your head?

If you’re like most people, probably the image that pop culture has encouraged: someone sitting in a dark room, only lit by the glow of their monitors, typing furiously at their keyboards while line after line of data scrolls down their screens.

This isn’t all that accurate.

The Types of Hacker

In actuality, there are many distinct categories of hacker, based on the motivations they have and their approach to accomplishing their goals. Originally, there were just two categories, inspired by the costuming conventions once found in Western movies. The hero typically wore a white Stetson, while the villain’s hat was traditionally black. However, as more complicated motives became apparent, more categories of hacker arose.

Primary Varieties of Hacker and Their Motivations

White Hat: These hackers are those who, going through the proper established channels, hacks into programs to help improve these programs’ security protocols. Anyone who assists you in running penetration tests or vulnerability assessments fits into this category, as their intention is to help keep your systems safe.

Black Hat: These hackers are the ones most people think about - the ones who you are afraid of targeting your business. Motivated by their own personal gain or ill will towards their target, these hackers intend to do some kind of harm by stealing credit card information or by leveraging other methods.

Grey Hat: Much like the color grey is the combination of black and white, a grey hat hacker is a blend of black hat and white hats. As such, while grey hat hackers have helped bring quite a bit of evidence to light and share it with the public, the tactics they leverage come from a black hat hacker’s playbook.

Green Hat: The greenhorn of the hacking community, a green hat hacker will commonly have no hand in any practical hacking attempts themselves, but is committed to acquiring as much knowledge about these attempts as they can.

Blue Hat: Another amateur, blue hat hackers rely on preexisting attacks and techniques to go after their targets. These attacks are typically rudimentary, and are often motivated by some personal offense or argument with the target.

The motivations of a hacker can be as varied as the types of hackers are, and some hackers don’t necessarily have a single motivation driving them.

Stealing Information for Profit or Distribution

This is perhaps the most well-known of a hacker’s motivations. Once data has been stolen, a hacker can leverage it for profit in various ways - identity theft, blackmail, or simply selling it to other criminals.

There are many hackers who see their hacking as a means of expression. If you recall the hack of the infamous Ashley Madison dating website (whose original slogan of “Life is short. Have an affair.” sums up its intended audience quite well), the perpetrators left a message that made it very clear that they saw the service as repugnant and demanded it be shut down, lest the stolen data be dispersed.

Of course, this is not the only example. “Hacktivists” and other politically-motivated hackers often attack certain organizations and political bodies to spread their message.

If a hacker holds issue with a website - not unlike the Ashley Madison hack described above - they will often work to overwhelm them and cause them to crash. There are a variety of common attacks that a hacker can utilize to accomplish this particular attack, including Distributed Denial of Service (DDoS) attacks or malware infections.

Stealing data isn’t the only way that a hacker can make money, and there are plenty of attacks that a hacker can use as a means of doing so. Whether they steal financial data or install ransomware on their victims’ systems, a hacker’s means of making money are effectively limitless.

Nefarious hackers aren’t picky about who they target, which means you need to worry about quite a few of these varieties. Compudata can help secure your business to protect it. Reach out to us at 1-855-405-8889 to learn more.

Would you believe it if we told you that the members of Generation X, Millennials, and Generation Z are more likely to fall for online shopping scams than those aged 60 or over? Well, according to the Federal Trade Commission, the numbers aren’t even close. If you’re under age 60, you’re 86 percent more likely to fall prey to scammers. END_OF_DOCUMENT_TOKEN_TO_BE_REPLACED