Understanding the Murky Nature of Shadow IT 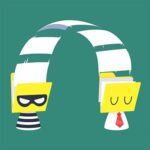 Shadow IT—while it sounds like the title of some B-movie suspense thriller or airport gift shop novel, it’s a very serious business issue that can easily make its way into your operations. Let’s review what shadow IT is, and what can be done to minimize the threats that it causes your business.

First, let’s define what shadow IT is.

Simply Put, Shadow IT is Stuff You Don’t Know About

Scary-sounding name aside, that pretty much sums up what shadow IT is: it’s anything that’s on your business’ network without the knowledge or approval of your IT department.

That’s it. It doesn’t mean something that’s inherently malicious, it’s strictly based on whether or not an organization’s IT team is aware of some software or hardware’s presence on the network and has approved its use.

Why is Shadow IT a Big Deal?

Here’s the thing: in the overwhelming majority of cases, shadow IT is the result of an employee’s earnest efforts to do their job. Let’s say that one of your team members is working on a task and they need to whip up a quick spreadsheet, but they don’t have the right software to do so. Instead of (in their mind) wasting IT’s time and having them install the software before they can finish their job, your team member takes it upon themselves to seek out an option online to download.

Great hustle, granted. Having said that, however, this kind of behavior can easily expose your business to threats.

First off, there are a lot of threats that could piggyback with your earnest employee’s download—assuming that the download wasn’t a disguised threat itself. Furthermore, there’s also the issue that the employee may have downloaded software that requires payment, inadvertently committing piracy in an attempt to do their jobs.

There are also compliance issues that come into play when shadow IT is involved. For another example, let’s say that some of your data is taken from your network by one of your employees so that they can work on it from home. The trouble is, your network should have protections and other such safeguards in place to protect this data… is the same true of your employees’ home setups?

It can also keep your team members from collaborating properly, opens you up to the risk of losing data, and prevents you from ensuring that everything is monitored and configured properly.

So, shadow IT is clearly a problem, despite the good intentions that commonly lead to it.

Shadow IT Comes in Many Forms

Shadow IT can show itself in various ways, including:

How to Deal with Shadow IT in Your Business

There are a few steps that you need to take to ensure that your organization is protected from the threat that shadow IT can pose to it. For instance:

Your IT Team Needs to Keep Track of All Technology Resources

You need to have a comprehensive list of the technology and solutions that are present in your business (and should be). This will help you catch when an unapproved bit of IT appears on your network, in addition to the typical maintenance purposes that such a record assists with.

Your IT Team Needs to Keep an Eye on Your Network

On the subject, your IT resources should be monitoring your network to keep track of any devices and resources attached to it. This makes it easier to catch shadow IT as it appears.

Your IT Team Needs to Keep Strict Guidelines in Place

Between the regulatory requirements that your IT needs to abide by and the third-party applications you don’t want your team using, your IT team needs to block access to anything that may be problematic while providing the approved tools to use.

Comments Off on Understanding the Murky Nature of Shadow IT
Posted in Blog, Security
Tagged Network Security, Users, Workplace Tips

Running a business can be stressful and scary, and for these reasons, it is perhaps one of the most amazing things that individuals can strive to do. Sure, there are countless ways that things could go wrong, but all it takes is for a couple of things to go right for you to see some level of success and reap... END_OF_DOCUMENT_TOKEN_TO_BE_REPLACED